@FozzyBeavertail The mayor's current ban is for 2 weeks. At this stage, yes we will continue as planned on June 6 &amp;… https://t.co/AX89yyFAQt

@Helene_wild_ai @BAFOUND Yes, race is still on. We are monitoring the COVID-19 situation and advice from the San Fr… https://t.co/OsfrETeiSZ

If you're a triathlete looking for a way in to the 2020 #EscapeAlcatrazTri, join TeamCindy! You must have 2 Olympic… https://t.co/LpNTDR7IZ1 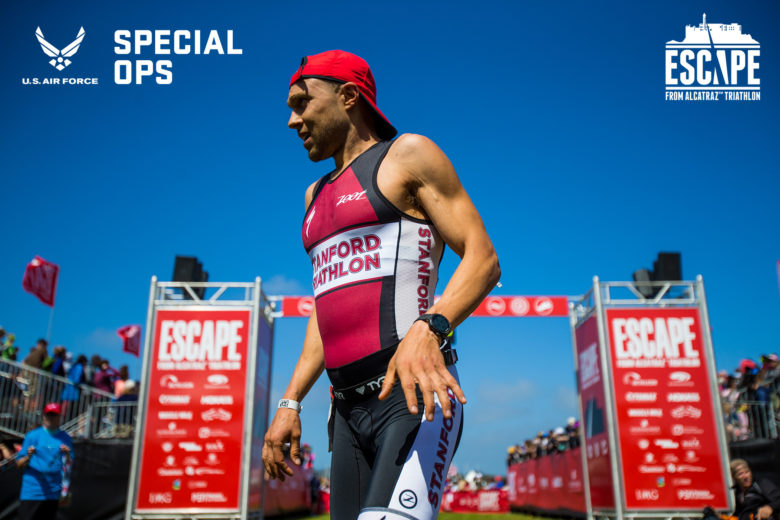 SAN FRANCISCO (April 23, 2019) – IMG, a global leader in sports, events, media and fashion, today announced the U.S. Air Force Special Operations Recruiting as the official military partner of the 2019 Escape from Alcatraz Triathlon and the title sponsor of the Escape from Alcatraz Triathlon Collegiate Escape, set to be held on Sunday, June 9, in San Francisco. The U.S. Air Force Collegiate Escape serves as a race within the race, where teams from colleges and universities from around the country compete for the coveted legacy trophy.

Undergraduate and graduate student triathletes will represent their college or university in teams of five. All participants will be scored in their respective race division, but only three of the five times will be counted towards the team’s overall time. The collegiate team with the fastest averaged combined time will win the U.S. Air Force Collegiate Escape. The winning team will take an engraved legacy trophy back to their school and also receive one complimentary team entry to compete in the 2020 Escape from Alcatraz Triathlon. Participating schools include: Stanford University; University of California, Berkeley; University of California San Diego, Texas Tech University; Air Force Reserve Officer Training Corps (AFROTC); and Naval Post Graduate School.

On race day and throughout race weekend, participating athletes and fans are invited to visit the “Air Force Special Ops Commando Experience,” an immersive experience showcasing what it takes to make it in Air Force Special Operations. From physical military workouts to a Virtual Reality simulation of freefall parachuting into a combat mission, the experience will test both mental and physical strength. Additionally, the U.S. Air Force Sand Ladder activation will track athletes split times as they make their way up the grueling 400-step sand ladder. A leaderboard will be positioned in the Fitness Festival & Expo to track and identify the fastest split time during the race.

“U.S. Air Force Special Operations Recruiting is excited to partner with Escape from Alcatraz Triathlon for this iconic race” said Lt. Col. Heath Kerns, commander of the 330th Recruiting Squadron. “Air Force Special Ops Warriors are forged in the fires of adversity. They constantly seek greater challenges to refine and define themselves by the ardor of their path. Triathletes are blessed with the same curse to crave that next challenge. For triathletes it is not enough to just swim, bike or run. They combine all three to push themselves to be stronger, faster, and tougher. These collegiate competitors understand how hard work, dedication and teamwork will help them do extremely well in this competition and that’s exactly what the Air Force is all about, intense training and working together to accomplish our objective.”

Top triathletes from around the world will take over the streets and waters of San Francisco for the 2019 Escape from Alcatraz Triathlon. Showcasing the beauty of San Francisco, triathletes will embark on a grueling 1.5-mile swim from Alcatraz Island to the shoreline of Marina Green, an 18-mile twisting bike ride through the Presidio, an eight-mile trail run out to Baker Beach and up the infamous 400-plus step Sand Ladder. Fans can experience the excitement at the Marina Green, where the swim exit, athlete transition area and finish line are easily visible. This bucket list triathlon will draw 2,000 racers from around the world, including 2018 Escape from Alcatraz Triathlon Champions Ben Kanute and Sarah Haskins. For additional information, visit www.EscapeAlcatrazTri.com or follow @EscapeAlcatrazTri on Instagram, @EscapeAlcatraz on Twitter and www.facebook.com/EscapeAlcatrazTri on Facebook.

The mission of the United States Air Force is to fly, fight and win in air, space and cyberspace. For 2019, the Air Force Recruiting Service is hiring over 32,000 new Airmen with an emphasis on recruiting people with no prior military service into one of over 130 enlisted career opportunities. The Air Force recruits to retain, so we recruit the brightest candidates possible, then provide them with tough, highly technical training that gives them the right skills to sustain the combat capability of America’s Air Force. For more information about Air Force opportunities and benefits, go to www.airforce.com.

IMG is a global leader in sports, fashion, events, and media, operating in more than 30 countries. The company manages some of the world’s greatest sports figures and fashion icons; stages hundreds of live events and branded entertainment experiences annually; and is a leading independent producer and distributor of sports and entertainment media. IMG also specializes in sports training and league development, as well as marketing, media, and licensing for brands, sports organizations and collegiate institutions. IMG is part of the Endeavor network.