Yes! We are encouraging everyone to #EscapeTogether next weekend (June 6+7). Swim, bike, run from wherever you are.… https://t.co/jEMWUXQw4x

Great read on the bond between father &amp; daughter, and the power of triathlon! This dynamic duo shared an unforgetta… https://t.co/M2ghgkAOQC

@KathrynBertine @espn Such a great essay! Thank you for sharing, Kathryn. Your dad sounds amazing &amp; funny. "Like fa… https://t.co/bQOHWcYNr2

Happy Memorial Day in the US! Thank you to all military personnel for your service and sacrifice. 🇺🇸🙏 https://t.co/TdhUlkF8wn 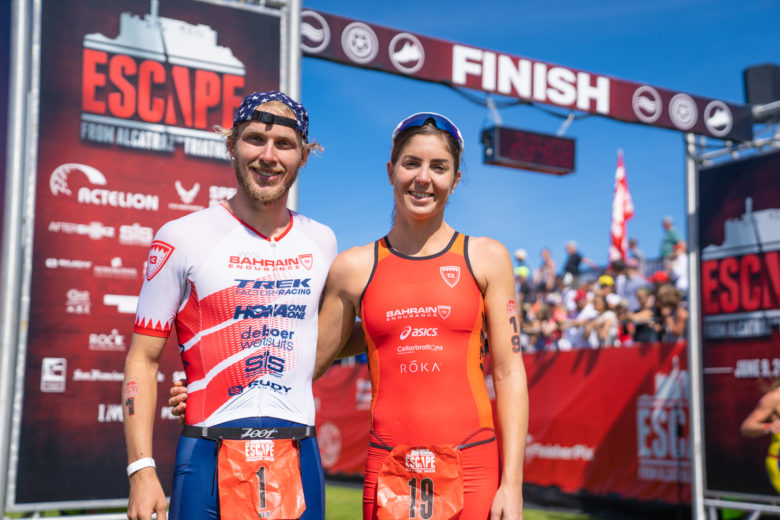 San Francisco – (June 9, 2019) On Sunday, June 9, nearly 2,000 amateur and professional athletes took the plunge into59.5-degree water to compete in the 39th Annual Escape from Alcatraz™ Triathlon. Olympians Ben Kanute and Ashleigh Gentle took first place honors in the men and women’s pro division. Featuring a 1.5-mile swim from Alcatraz Island to the shore, an 18-mile bike ride and an eight-mile run through San Francisco, this race is considered one of the most challenging triathlons in the world.

“We could see from the boat how strong the current was today, which added to the already challenging swim,” said 2019 Escape from Alcatraz Triathlon Winner Ben Kanute. “Everyone had their own plan about how they were going to tackle the swim. The weather was perfect today. I love this race, there is a lot of history here and every year it gets a strong field of professionals.”

Kanute was second out of the water behind Australia’s Josh Amberger. He caught Amberger on the bike and had to hold off fellow Rio Olympian Joe Maloy to secure his win. Gentle was fifth out of the water and worked hard on the bike to get back in the race and then maintain the lead in front of Goss to finish strong.

“Since I was fifth out of the water, I knew I had to be patient, ride strong and pace myself to get back into the race,” said 2019 Escape from Alcatraz Triathlon Winner Ashleigh Gentle. “The Sand Ladder and the beach run were so tough. I am so excited to have been able to win here a second time. I really enjoyed the crowds cheering along the course and at the finish line.”

University of California Berkeley took first place in the United States Air Force Special Operations Collegiate Escape with a finishing time of 1:54:27. The Salesforce Team Heroku took first place in the Actelion Corporate Escape. Racers representing 58 countries, up to 77-years-old and a number of physically challenged athletes from Challenged Athletes Foundation participated in the triathlon.

IMG is a global leader in sports, fashion, events, and media, operating in more than 30 countries. The company manages some of the world’s greatest sports figures and fashion icons; stages hundreds of live events and branded entertainment experiences annually; and is a leading independent producer and distributor of sports and entertainment media. IMG also specializes in sports training and league development, as well as marketing, media, and licensing for brands, sports organizations and collegiate institutions. IMG is part of the Endeavor network.